MUSKEGON–It was February 1948, when Alvin Nugent ‘Bo’ McMillin flew to Detroit to negotiate a new life.

A contract with the Detroit Lions would more than double his current salary at Indiana University, where he served as the school’s football coach and athletic director. He still had seven years left on a 10-year contract he signed with the university, and while confident the IU board wouldn’t oppose his move, he was torn. His Hoosiers had compiled the school’s first ever undefeated season in 1945, ranked fourth in the nation and won the Big Nine Conference (as it was then known) with a 9-0-1 record. The only blemish was a 7-7 draw with Northwestern in week two of the season.

“Leaving college football after all these years touches my heart,” McMillin told The Associated Press. “Most of my friends over the years have been students. I can honestly tell you that I have been sweating blood for ten days now, making my decision to accept this position with the Lions.

A college football legend, McMillin had spent 26 seasons as a college football coach, first at Centenary College in Louisiana, then at Geneva College in Pennsylvania, then at Kansas State. From 1934, he moved to Indiana, where he remained for 14 years. He had been a three-time All-American quarterback for the “Praying Colonels” at tiny Center College in Danville, Kentucky.

In 1921, as a senior, the 5-foot-9, 175-pound triple threat guided his team to the unthinkable – a stunning 6-0 win over a Harvard side – unbeaten in 25 games since 1918. The surprise, played before 43,000 fans at Harvard Stadium – was boosted by McMillian’s 37-yard TD run in the third quarter. More than 100 years later, he is still considered one of the greatest in college football history.

Major overhaul
Detroit was in rebuilding mode in 1948, although it wasn’t called that at the time. After a disastrous 0-11 season in 1942, the Lions had persuaded 51-year-old Charles E. ‘Gus’ Dorais to leave the University of Detroit to become head coach, general manager and partial owner of the team. A former Notre Dame star, Dorais had spent 18 seasons (1925-42) at the U of D as athletic director and head football coach, compiling a solid 113-48-7 record.

The move was costly, as Dorais was four years old on a five-year contract. Owner of the team since 1940, Mandel sold the coachless Lions to a syndicate of Detroit business owners, including WO ‘Spike’ Briggs, son of Detroit Tigers owner, in January 1948. The new ownership made knowing that they were looking to land a “big name” to coach and resuscitate the franchise.

The ‘Bo’ before Schembechler
“Did you know that Bo McMillin is at the Book-Cadillac hotel?” reported the Detroit Times, the city’s gossipy evening newspaper, in early February.

“I hope I’m not mentioned as a candidate,” McMillin said after the leak. “I give my opinion on the coaches they are considering and also some general football tips that they might find useful in their new venture.” 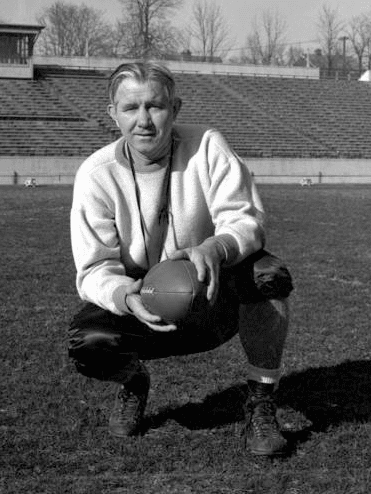 Restoring Lions to Hopeful Prominence
Within days, McMillin went to work as the new Lions coach, bringing much of his staff to IU in Detroit. In April, he signed Indiana halfback Mel Groomes and University of Michigan and Bob Mann to contracts. Both were the first African Americans to play for Detroit. (At the time, only the Los Angeles Rams had previously joined their team.)

In 1946, the Lions moved their training camp from Assumption College in Windsor, Ontario to Alma College. He would remain there throughout the 1948 season, moving to Michigan State Normal College (now Eastern Michigan University) in 1949.

In June, Detroit announced plans to play four statewide intrasquad contests as part of a seven-game fundraising exhibition program. Intra-squads would be played in August at Pattengill Stadium in Lansing, Bay City High School Stadium, Alma College and, finally, Hackley Stadium in Muskegon. Three preseason charity games would then be played in September – against the Philadelphia Eagles at U of D Stadium, against the New York Giants at Flint’s Atwood Stadium, and at Forbes Field in Pittsburgh with the Steelers.

The four intrasquad games would help the coaching staff whittle the roster from 55 players — including 31 veterans — to a maximum of 35 players before the season opener. McMillin cautioned fans against being too optimistic, noting he was still working with the same staff who won just three games a year ago. Among the newcomers was Arizona star Fred Enke, “the nation’s top earner last year in collegiate circles.”

The core of the team began nearly two months of preparation on August 1.

Early on, Muskegon Chronicle sportswriter Jimmy Henderson summed up the task ahead of the team’s visit to town.

“(McMillin’s) specialty of nursing sick football teams must be continued if he is to get the ailing Detroit Lions back on the path to victory.”

For intrasquad games, the coach had his teams split into “Blues” and “Grays” (an interesting choice because in July McMillin and the new owners unveiled a new color scheme for the Lions that season. uniforms resembling those used by its Hoosier teams—Scarlet and White and, alternatively, all black with a thin scarlet stripe on the pants for special competitions—were worn by Detroit for games that year. “first color change since the Lions entered the National Football League in 1934.” (The colors will disappear completely before the 1950 season.)

When intrasquads made no sense, Enke impressed fans and staff alike, throwing two touchdowns and running for a third leading the “Gray” team to a 21-7 win in front of a near-full crowd of 5,720 at Lansing on August 14. Five days later, he led the ‘Grays’ to a 28-7 win at Bay City where veteran lineman Merv Pregulman, doubling as the team’s kicker, was accurate on all four extra kicks ‘Gray “.

By the Alma exhibition, played in front of 2,300 home fans on the 23rd, McMillin had narrowed the roster to 46. The ‘Greys’, now mostly made up of 1947 regulars, won again, 23-0. The focus was on running the ball, as McMillin announced he was pleased with the team’s passing attack.

Brutal temperatures of 92 degrees greeted the Lions in Muskegon on Friday August 27. The game, a fundraiser for the Muskegon ‘M’ Club which supported high school athletics, was scheduled to kick off at 8.30am and drew a crowd of 6,842 despite the heat. In the stands were “football players from four Greater Muskegon high schools who this fall will entertain local audiences” – all guests of the “M” Men. Countless others tuned in to a live broadcast of the contest on the city’s “pioneer FM station,” WMUS.

Mann, who played in the College All-Star Game in Chicago on Aug. 22, was back and added to the “Gray” team roster for the game in Muskegon.

Fans were treated to a spectacle during the all around contest, according to Henderson, as “McMillin didn’t spare their star players while giving everyone on the bench at least a short stint on the court.”

“Mann was only in the game for one game in the first half,” catching a pass from Enke from 14 yards out and then avoiding two defenders to open the scoring.

The “Blues” recovered in the second quarter, threatened, but unable to score. Enke and Mann connected again for a score, this time from 21 yards near the end of the third. Pregulman again scored the extra point and the “Greys” led 14-0.

“The Muskegon High School band added to the color of the Midsummer Night’s Football game. They played the national anthem before the game, led by William Stewart, and at halftime played several selections.

In addition to the festivities, former Muskegon and University of Illinois football coach Robert C. Zuppke was introduced from the field. Zuppke had just returned to Muskegon from Brooklyn, where he advised Branch Rickey’s Football Dodgers on gridiron tactics. (The Dodgers competed in the All-American Football Conference, an NFL rival league.)

‘Lions exude confidence as they head for the opener’

The successful pre-season had raised hopes.

“A confident team of 34 Detroit Lions boarded the Super Chief (in Chicago) on Sunday afternoon and headed to Los Angeles” for their Wednesday, Sept. 22, season opener with the Rams, according to the Detroit Free Press. The visit to LA on the famous “Train of Stars” would bring the team – and the fans – back down to earth fast. The McMillin Lions, favorites to win, received a harsh dose of reality, beaten 44-7 by their divisional opponents.

The McMillin Lions won just two games in 1948, racking up 10 losses, and once again landed in the West Division basement. The team won four games in 1949 and improved to 6-6 in 1950. But that was enough for McMillin, who quit – many said with encouragement from management – ​​after the season. With 2 years left on his contract, an “amicable settlement” was reached.

The Muskegon Lions? It’s hard to imagine some 75 years later, given the multi-billion dollar valuation of a single NFL team today.

However, given the team’s relentless attempt to rebuild the program, one might wonder, has anything really changed?

Washington schools in town this weekend